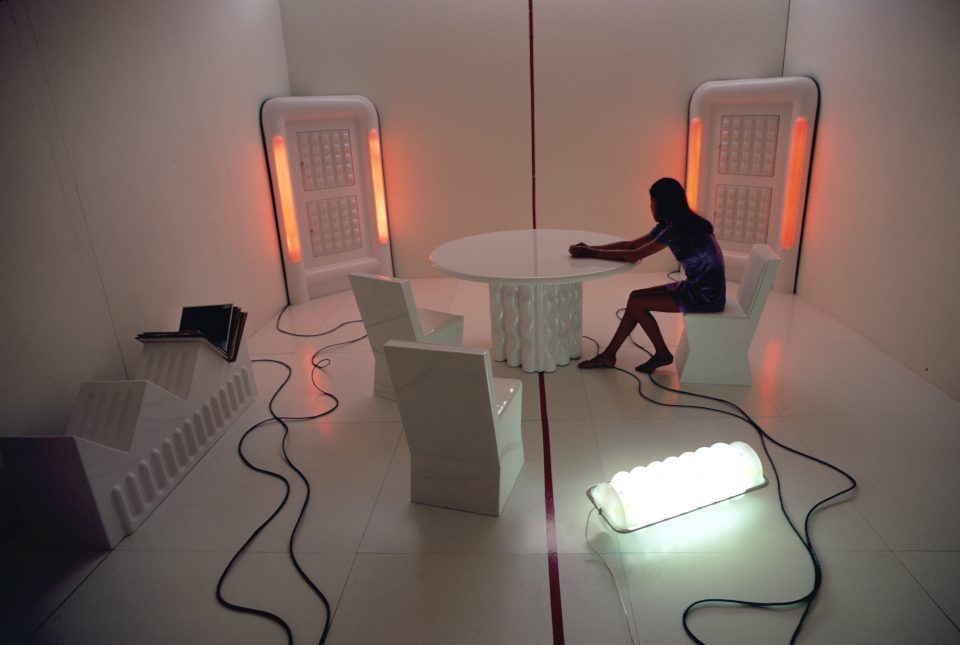 Gianni Pettena. Furniture filters its own time, absorbing and retaining the ingredients, the dust of cosmic wind. A solar wind of intense emotions and considerations, from when we discovered that, having learned the lesson after being immersed in the milky pool of reason, it is possible, pleasurable, necessary, to bask in colors, emotions, and sensuality. And thus play and irony also emerge, watching oneself work gazing down from silent flight in a hot-air balloon. Anger, violence, frustrating waits and pursuits do not enter in Poltronova’s world of design, which gathers and filters those who conceive dreams of precise balance, of the quiet condition of thought. And over the years, soft warm memories and timeless ideas accumulate and resurface, walking across warm sand, far from the din. Ettore seems to have opened this door (or this window) because many of us – convinced (he had already been there) by the light, the color, and the material that once again illuminated the world of design – went through that door and we took our own individual paths, grateful to him for having shown us that there, on that side, it was possible to move through the world of design and architecture without losing pieces of ourselves, our desires, and our world of thoughts and emotions along the way. In his magnetic field the route, and the different itineraries for finding it again, were indicated.
Poltronova came into being in an old Fiat Topolino, in which Sottsass and Cammilli spent a lot of time traveling down roads that ended up leading them to invent an atmosphere infused with a fragrant world of enchanted objects. The parties, openings on the terrace, surrounded by new furniture creations.

And a lot of travel companions along the way, from Gae Aulenti to Mangiarotti, Michelucci and then the “Radicals” Archizoom and Superstudio, and also Ruffi, Nespolo, Ceroli, and Max Ernst, artists sketching a dream in the form of domestic space, and Portoghesi, the Vignellis, Jonathan de Pas, Enzo Mari. With Stefano Baldi and Biagio Cisotti after Cammilli left, and also Nigel Coates, Ron Arad, Prospero Rasulo, Piero Derossi, and Franco Raggi, who continue this long journey, always looking ahead to our future.

Sergio Cammilli’s adventure began with Ettore Sottsass, and in those years it couldn’t have happened any other way. They were united by having different backgrounds and experiences, but similar desires. And the first pieces of furniture produced show how one could escape the rationalist perspective and rediscover colors, materials, and decorative details. The furniture was made in solid walnut and chestnut, but also in laminate and fiberglass, and objects were made in ceramic, glass, and metal. But at Poltronova paths were followed other than those of seeing, purchasing, and producing furniture. Cammilli welcomed, and was sensitive to the fiery wave of the creative, critical, and visionary output of the Sixties. Ettore and his wife, Fernanda Pivano, had friends such as Hemingway, Kerouac, and Ginsberg, but also Pistoletto, Pezzana, and a lively mixed group of youngsters, which I was a part of, who frequented their house in Milan at Via Manzoni 14, second floor, after 7:00 pm. And there you would meet poets, artists and, fortunately, few architects. There was a lively, exciting atmosphere, and you had the feeling that you were taking part in creating a world of colors and peace, of relaxation and emotions. So, Ettore captivated all of us, because he and his work reintroduced the pleasure of the color of the material, and of the irony of provocation, to the world of design. And with Nanda and Allen Ginsberg we created Pianeta Fresco, a magazine that was practically handmade, which we had a hard time putting together and paying for.

And so events took place at Poltronova such as poetry readings by Ginsberg, me organizing a series of films produced by artists, the first showings of films by Warhol, Kuchar, Deren, Brackage, Burkhardt...

“Cammilli welcomed, and was sensitive to the fiery wave of the creative, critical, and visionary output of the Sixties.”